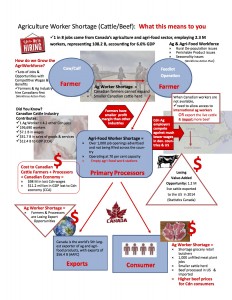 Specifically, they found that the population in the least happy communities was more than eight times higher than in the happiest ones.

The other change is an “exemption on the cap for seasonal industries for up to 180 days during the 2017 calendar year will be extended until December 31, 2017″.

Canada Summer Jobs provides funding to help employers create summer job opportunities for students. It is designed to focus on local priorities, while helping both students and their communities.

Canada Summer Jobs provides funding to not-for-profit organizations, public-sector employers and small businesses with 50 or fewer employees to create summer job opportunities for young people aged 15 to 30 years who are full-time students intending to return to their studies in the next school year.

Want a Job? Major in Agriculture.
By Alison Rice, AgWeb.com

Farmers struggle with labour shortage
With more jobs than applicants, operators must get creative when recruiting employees

Have a question? Send us a quick email and we'll get back to you.